I don’t think it was only me that was surprised at the BaselWorld 2016 when Seiko revealed it’s new line of Grand Seiko watches.
What they showed was a very sporty collection consisting of four limited edition pieces equipped with Spring Drive movements and dressed in Black Ceramic.

There are two GMT/Chronographs using the 9R96 and two GMTs with the 9R16 movement.
Both movements have an accuracy of +/-0.5 seconds per day (+/-10 seconds per month) and a power reserve of 72 hours.

The big news here is the visual appearance and shape of the new cases which are a five piece construction made of high-intensity titanium and ceramic providing both strength and lightness. The inner case is made of titanium and the outer shells and bezel are zirconia ceramic which is said to be stronger then any other ceramic and seven times harder on the Vickers scale than stainless steel. The sapphire crystal is double domed with anti-refelctive coating on the inside. The screwed case back has a see-through sapphire crystal enabling clear visibility of the movement. The crown is also screw down ensuring a 10 bar water resistance.

The watches are quite large, but fits very well on the wrist (pictured below on mine which is 19cm). Due to the material used they are quite light, actually 25% lighter than if they would have been made entirely in stainless steel.

These are the first Grand Seikos in black, but the high polish, nice facets on the case and the diamond cut hands make them instantly recognizable as such.

The Chronographs are 46.4mm wide and 16.1mm thick. The GMTs share the same width but are a tad thinner at 15mm. All watches come with a crocodile strap (nice color trimming on the side) with a three-fold clasp with push-button release. 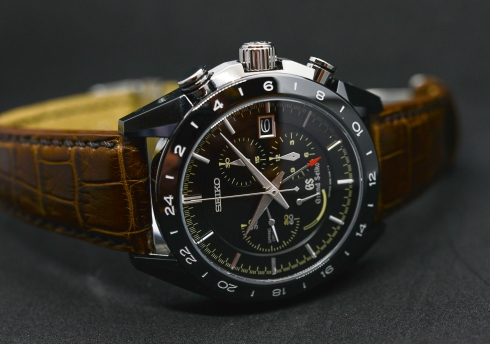 For the Black Ceramic Limited Edition Seiko also worked together with two contemporary Japanese photographers, David Moriyama and Nobuyoshi Araki. Based on some of their most famous photographs straps for the collection was created. 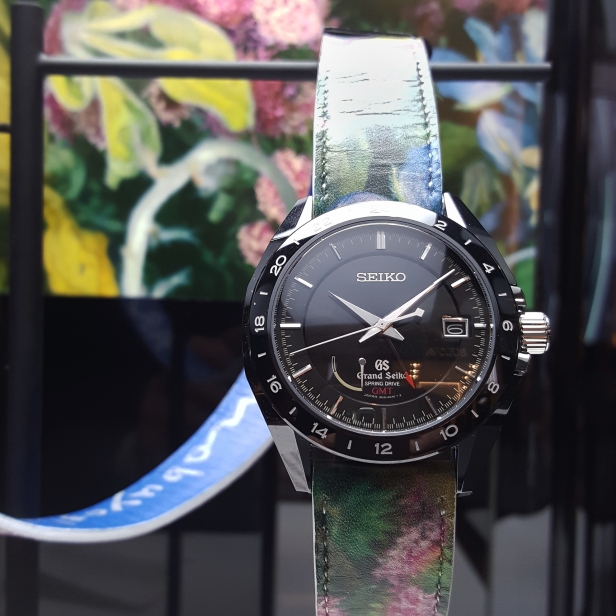 Personally I really like this new sporty and very contemporary feeling line of Grand Seikos.